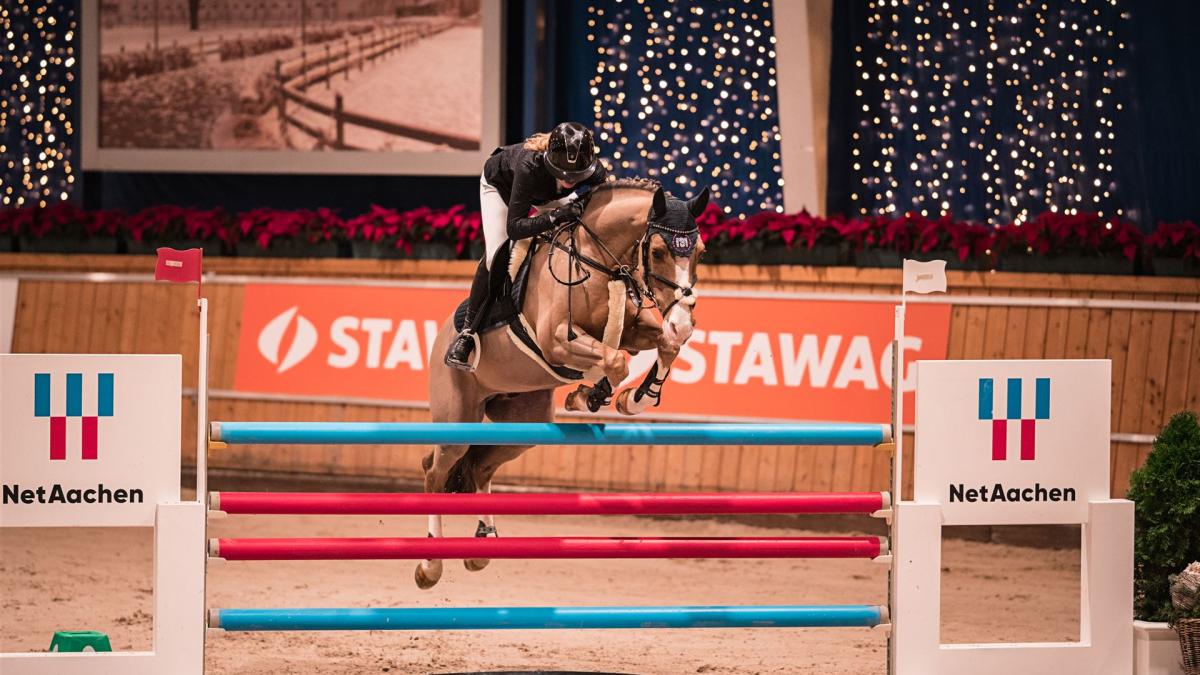 Stars of the South – Bavaria strong in Aachen

The best aspiring young show-jumpers are still turning off in the other direction at the traditional showgrounds of the CHIO Aachen. At the weekend, once they had saddled their horses they headed a few metres North after leaving the stables – to the Albert-Vahle arena. Their big role models on the other hand head to the West in the Summer for the legendary Main Stadium. Many of the young athletes, who competed in four age categories from Thursday to Sunday, will be taking the route to the West in just a few years’ time.

It was curious: Many famous names took part this year: Brianne and Cecilia Beerbaum, Max Merschformann and Jolie Marie Kühner have famous parents from the riding scene, June Karlinder is the daughter of the presenter Charlotte Karlinder and Ava Ferch’s parents are the actor Heino and the eventer Marie-Jeanette Ferch. And yet nobody was interested in their famous parents at the weekend because the performances of the aspiring equestrian talents were fabulous in their own right. Ava Ferch was the most successful. The 14-year-old from Ammersee in Bavaria, who competed in the Children’s category (aged up to 14 on horses), won the “Preis der Firma Kelleter – Ihr Generalunternehmer für den Innenausbau”. The team European Champion picked up the victory with Quintessa, her tactics were very simple: “I simply tried to be as fast as possible.” Laura Hertz-Eichenrode came second with Forever. Third place went to Luise Konle, who also claimed the title “Children’s Champion 2022 presented by UVEX“. She was correspondingly happy with her weekend: “My horses were in super form, they really felt at home here and I am simply delighted about our wonderful success.”

It certainly was a successful show from Bavaria’s point of view. Since for Leonie Assmann from Sigmarszell on Lake Constance the approx. seven-hour trip home promises to be enjoyable too. Because the 15-year-old’s plan turned out to be spot on: “I came here with the intention of winning again.” A simple and at the same time ingenious plan. The Swabian Pony rider won the “NetAachen-Preis” last year and this year she was able to defend the title riding her nimble mare, Hankifax. She was also crowned “Pony Champion 2022 presented by UVEX”. Leonie is in the 11th grade, so it is obvious that her focus also lies on school. However, the top priority does seem to be somewhere else: “Of course, school is important, but I want to make it big with riding.” That is not really surprising, her parents – successful breeders – bought her first Shetland pony before Leonie was even born. And her success in Aachen was at least hinted at – her first jumping horse is namely called “Kaiser Karl”, who is of course considered to be the founder of Aachen. According to the legend, his horse scraped away the earth with his hooves to reveal the famous hot springs of Aachen.

“Caboom” ahead of “Zapzarap” – that sounds like speed. Whereas in comparison Charlotte Höing simply took her time in the jump-off of the “STAWAG-Preis”. And lo and behold, her plan was successful. She may have been the slowest to reach the finish line in the jump-off of this Kl. S** Juniors class (aged up to 18), but she was the only rider to jump clear with her horse Caboom. Tjade Carstensen came second with Zapzarap, in a time that was an incredible eight seconds faster than the winner, but unfortunately the pair picked up four faults on the way. Charlotte Höing was the only competitor who had previously gained special experience at the Soers: She already knows what it is like to ride in the Main Stadium, just 100 metres away. The German rider namely took part in the “Youth Equestrian Games” in the summer – the Olympic Summer Games for aspiring talents, which were staged during the CHIO Aachen. Indeed, she almost won, four faults at the last fence dashed her dream. She didn’t make the same mistake at the “Jumping Youngstars”. “It was an incredible weekend, awesome, much better than expected,” commented the 18-year-old sports soldier from Warendorf in Westphalia. She reported that she had of course come with the intention of achieving a top ranking, but “that I never imagined I would actually win.” Romy Rosalie Tietje secured herself the title Junior Champion. The 17-year-old from Eckernförde came third in the “STAWAG-Preis”, which meant she claimed the overall victory: “It was unbelievable and it is difficult to find words for it. My horse Cascadino did a top job all weekend. He jumped so fantastically that I was able to just ride into the arena and simply enjoy it.”

Charlotte Grave was simply overwhelmed. The 20-year-old business computer science student won the “Großer Preis der Aachener Bank eG” , a S*** class for Young Riders, with her mare, Hella. “I still can’t believe it. The best weekend, the best feeling,” she raved and of course her first thought went to her horse: Hella and I deserved that, she is the most important thing ever, the best fighter.” And thought number 2? “None of this would have been possible without the best trainer, my boyfriend Andre Schröder, it is awesome here!” It was Charlotte, who comes from Tangermünde (“The most beautiful city in Altmark“), and Hella’s first performance in an advanced class. And now? Taking part at the CHIO Aachen one day? “An incredible idea. I think if we continue fighting and training hard, then it might hopefully be possible one day.”

“Abnormal, awesome, incredible” – Annika Betz was also lost for the right words. The 19-year-old who lives near Stuttgart was crowned “Young Rider Champion presented by UVEX”, in other words she was the most successful rider across all three classes: “It is simply incredible to win the title of Indoor Champion here, I rode my first S*** class today, I simply can’t describe it all in words, really incredible!” Or awesome. Or abnormal.

All info and all results can be found here

We use cookies to optimise our website and offer you the best possible online experience. By clicking on “Accept all”, you give your consent to these. Further information and the possibility to allow individual cookies or deactivate them, can be found under “Cookies”.